I previously posted some information on Legal Aid and Advice in Trinidad and Tobago, but more than a year later, there has been updates, with a much better website:
http://www.moj.gov.tt/content/legal-aid-and-advisory-authority


Legal Aid, advice and representation in Court are provided by Legal Officers and Attorneys- at-Law in private practice who have registered to be the panel of attorneys attached to the Authority. Legal Aid and advice may be attained in matters such as:

Legal aid is not provided for ‘defamation election petitions’ and ‘traffic matters’.

Legal Officers are available at various locations throughout Trinidad and Tobago. In cases where an attorney appears on behalf of, or represents the applicant in a legal matter, the applicant is not required to pay the Attorney. However depending on an applicant's means particularly in civil High Court matters, the Legal Aid and Advisory Authority may request from the applicant a small contribution that is paid directly to the Authority. In such cases, an official receipt is issued for the amount paid.
2 comments:

Q: Email from Alana N. with 4 separate questions. This is question #4

A: If an employee is asked to carry out a specific task (by senior management) which is deemed unethical and goes against company’s procedure it is well within their right to refuse this task not so?

An employee should ALWAYS refuse to perform any task that is illegal or unethical. However, "ethics" can be subjective, meaning that different people will have different views on what is right or wrong, so this can be a tricky situation for an employee if the matter does go to court.

I have never come across a case involving an unethical request, but for illegal requests see:  Showboat Entertainment Centre v Owens [1984] ICR 65

Q: Email from Alana N. with 4 separate questions. This is question #3

Unfortunately, the qualification period for an employee to bring an unfair dismissal claim is 12 months. The employee has made the first key step, which is raising the matter with the Manager, but now it must be put into writing as an official grievance.  The employer should then arrange a meeting for facts to be presented, and then an appeal must be allowed, if necessary.

It does seem to be a prima facie case of victimisation, according to Section 6 of the Equal Opportunity Act 2000, which states that a person is victimised if he/she is treated less favourably than the employer would treat others under the same circumstances.
15 comments:

Rights of Employees on Probation

Q: Email from Alana N. with 4 separate questions; these are the first two:


No, the employer CANNOT extend an employee’s work hours without notice, reason and increase in salary; and either way, it is a variation of the contract, so it will need to be accepted by both parties. The fact that it has only happened to one person is an even stronger reason why it will have no legal ground if it is forced on the employee and the matter goes to court. I would recommend that the employee raises a formal grievance concerning the matter.

An employer can terminate an employee’s contract without going through the procedures of warnings DURING the probationary period, but the proper procedure for dismissal (1 week notice) is still required. However, if at the END of the probationary period, the employee is fired for a non-performance related reason (and everyone is aware that the employee stood up for his/her rights), it will definitely be seen as victimisation, which is illegal according to the Equal Opportunity Act 2000.

“It is a well-established principle of industrial relations that the services of a worker on probation cannot be dispensed with for tenuous or improper reasons. An employer is not entitled at his will to terminate the appointment of a worker merely because he is on probation.”

When I started this website, I had one thing in mind, and that was helping people! Over the years I have helped hundreds of people: Trinbagonians, Americans, Indians, Venezuelans, Chinese, Canadians, Brits and many others; from the average man to CEOs and Lawyers, who all had a legal question in regards to Trinidad and Tobago law.

I don't do this for money, fame or even thanks, but almost everyone who has been helped by me has thanked me. However, this special thank you made me smile (and blush) so much that I just had to publish it;


It feels good to know that I have made, and continue to make a contribution to a better and fairer society for all.

Sick leave while on vacation

Q: I took vacation leave, but became ill at the last week and was given two days sick leave which fell consecutive with the vacation. Now that I am back to work, my employer is claiming that the labour law does not allow sick leave to be taken consecutive with vacation and is cutting my salary. I need to know if such info is accurate. 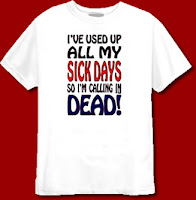 A: Employees who become ill while on annual paid leave must be allowed to retake this time off. This was confirmed in Stringer v HMRC [2009] and Pereda v Madrid Movilidad [2009], which were decided by the European Court of Justice (ECJ) and accepted by the respective Supreme Courts of the UK and Spain.

The Stringer case concerned a number of employees.  One of those was still employed but off sick.  She wanted to be paid for holiday during her sick leave rather than lose the leave entitlement.  The others had been dismissed and wanted to be paid in lieu of untaken leave from previous holiday years.  In this case, the ECJ confirmed that workers on sick leave continue to accrue holiday rights.

In the case of Perada, the Spanish employer had a system of notifying employees of when they would be taking their leave in advance (like the traditional factory fortnight).  This was to ensure numbers of workers off at any time did not exceed the employer’s acceptable levels.  The rule was that leave could not be changed with less than 45 days’ notice.
According to the rota for 2007, Mr Pereda was due to take annual leave from 16 July to 14 August. However, following an accident on 3 July, he took sick leave until 13 August, with the result that all but two days of his annual leave coincided with his sick leave. Because of this, he asked the employer to grant him an alternative period of annual leave from 15 November to 15 December.  The employer refused without giving reasons.
The ECJ decided that while the Directive allows workers to take holiday during sick leave, if they do not wish to do so and their prearranged holiday coincides with a period of sick leave, the holiday must be granted at a different time, even if this means carrying it over.
So, because this is current law in Europe and the UK, it will be followed at the Industrial Court in Trinidad and Tobago, if it gets there. Your employer cannot deduct wages for being sick on your holiday, unless he believes that you were being untruthful, and he must give you those entitlements back.
80 comments: