The illegality of wrecking

I've been given the opportunity to write a weekly column in the Trinidad & Tobago Sunday Newsday; here's the first article I wrote. 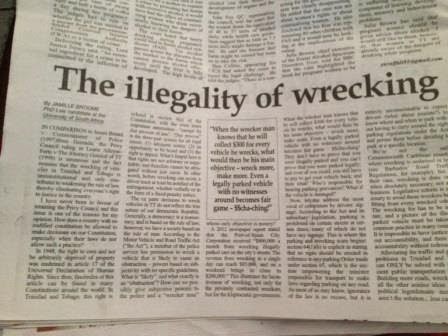 In comparison to James Bristol v Commissioner of Police (1997) from Grenada, the Privy Council ruling in Learie Alleyne-Forte v The Attorney General of T&T (1998) is erroneous and the fact remains that the wrecking of vehicles in Trinidad and Tobago is unconstitutional and only contributes to weakening the rule of law, thereby eliminating everyone’s right to justice in the country.

I have never been in favour of retaining the Privy Council and this issue is one of the reasons for my opinion. How does a country with no codified constitution be allowed to make decisions on our Constitution, especially when their laws do not allow such a practice?

In 1948, the right to own and not be arbitrarily deprived of property was enshrined in article 17 of the Universal Declaration of Human Rights. Since then, fascimiles of this article can be found in many Constitutions around the world. In Trinidad and Tobago, this right is echoed in section 4(a) of the Constitution, with the even more important annexation– “except by due process of law”. “Due process” is the three-part system for all legal issues: (1) adequate notice, (2) an opportunity to be heard and (3) the right to appeal. What’s limpid here is that rights are not arbitrary or negotiable; and therefore cannot be abrogated without just cause. In other words, before wrecking can occur, a driver must at least be notified of the infringement, whether verbally or in the form of a fixed-penalty notice.

The ex parte decisions to wreck vehicles in TT do not reflect the true nature of our democratic Republic. Generally, a democracy is a nomocracy, and is based on the rule of law; however, we have a society based on the rule of man. According to the Motor Vehicle and Road Traffic Act (“the Act”), a member of the police service has permission to wreck a vehicle that is likely to cause an obstruction – powers based on subjectivity with no specific guidelines. What is “likely”, and what exactly is an “obstruction”? How can we possibly give subjective powers to the police and a “wrecker man” whose only objective is money?

A 2012 newspaper report stated that the Port-of-Spain City Corporation received “$800,000 a month from wrecking illegally parked cars on the city’s streets. The revenue from wrecking in a single day can reach $85,000, and on a weekend brings in close to $200,000.” This illustrates the lucrativeness of wrecking, not only for the privately contracted wreckers, but for the kleptocratic governments. When the wrecker man knows that he will collect $300 for every vehicle he wrecks, what would then be his main objective – wreck more, make more. Even a legally parked vehicle with no witnesses around becomes fair game – $$cha-ching! They don’t have to prove that you were illegally parked and you can’t prove that you were parked legally; and even of you could, you still have to pay to get your vehicle back; and then what? Who’s responsible for hearing parking grievances? What if the vehicle is damaged?

Now, let me address the most vocal of complaints by drivers: signage. According to the Act and its subsidiary legislation, parking is prohibited on certain streets at certain times, many of which do not have any signage. This is where the parking and wrecking scam begins: section 64(1)(b) is explicit in stating that no signs should be erected in reference to any parking Order made under section 65, which is the section empowering the minister responsible for transport to make laws regarding parking on any road. As most of us may know, ignorance of the law is no excuse, but it is entirely unconscionable to expect drivers (what about tourists?) to know where and when to park without having to carry around the eight parking regulations under the Act, and peruse them before deciding to park at a specific location:

We’re not the only Commonwealth Caribbean country where wrecking is enshrined in law (see Barbados’ Road Traffic Regulations, for example), but in their case, wrecking is done only when absolutely necessary, not as a business. Legislative reform is necessary to avoid these wreckers benefiting from every wrecked vehicle. The wrecking fee has to be a flat rate, and a picture of the illegally parked vehicle must be taken - a common practice in many countries. [An even better alternative is clamping]. It is impossible to have justice without accountability, and there is no accountability without redress.

Alleviating the traffic and parking problems in Trinidad and Tobago can ONLY be solved with an efficient public transportation system. Building more roads, wrecking, and all the other asinine ideas are only political legerdemain: more roads aren’t the solution... less cars is!

Email ThisBlogThis!Share to TwitterShare to FacebookShare to Pinterest
Labels: The illegality of wrecking, Trinidad and Tobago wrecking is unconstitutional

Poll: Religion v Rights: should homosexual activity continue to be illegal in T&T?

Q: A friend of mine came over to my house for a birthday party. She tripped on some loose tiles and ended up fracturing her wrist when she fell. Am I responsible even though I didn't know? 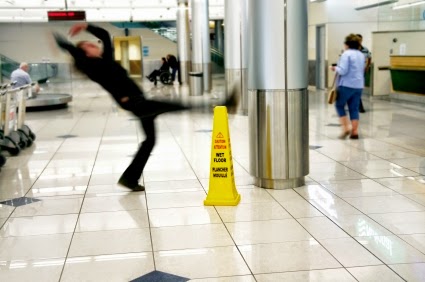 Here’s the law surrounding this topic.

Who is an occupier?
According to Wheat v Lacon (1966), an occupier exercises a sufficient degree of control over the premises
In this case,  4 categories of Occupiers were identified:

What are premises?
“… any fixed or moveable structure, including any vessel, vehicle or aircraft.”

Dangerous Premises
Occupiers must keep premises in a reasonably safe condition. There must be “negligence”, “defect” or “danger” with the premises for a claim to succeed.

Categories of persons on property:
Visitors
Anyone with expressed or implied permission to be on the property.

ž  Jehovah’s Witnesses? Political Canvassers?
Robson v. Hallet (1967)
“...when a householder lives in a dwelling house to which there is a garden in front and does not lock the gate of the garden it gives an implied licence to any member of the public who has lawful reason for doing so to proceed from the gate to the front door or the back door...”


According to Addie v Dumbreck [1929], there is no duty of care owed to trespassers. The only duty was not to inflict harm wilfully.
2 comments: