Broken engagement: who keeps the ring?


Q: My boyfriend proposed, gave me a ring and then cheated on me 2 months later. I dumped him and now he wants the ring back. What does the law say about this? 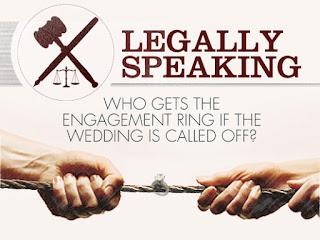 A: I was unable to find anything in Trinidad law concerning it, so…

British Law (most likely what T&T will follow)
According to the UK’s Law Reform (Miscellaneous Provisions) Act 1970 - Section 3(2); “The gift of an engagement ring shall be presumed to be an absolute gift; this presumption may be rebutted by proving that the ring was given on the condition, express or implied, that it should be returned if the marriage did not take place for any reason.”

In other words, the engagement ring is a gift and the ring-receiver is not obliged to return it.

American Law
Legally, this condition can be subject to either a modified or a strict fault rule:
There is also a third instance called the no-fault rule, whereby the ring must always be returned regardless of the circumstances. The ring only becomes the property of the woman when marriage occurs.

As with almost all laws in America, every state is different:

States Where an Engagement Ring May Be Kept:
In these locales, an engagement ring is considered to be an implied conditional gift and if the guy breaks the engagement, he won't get the ring back. If he doesn't break the engagement, he can request its return. Bottom line: If you get dumped, you get to keep the ring in these states.
Implied Conditional Gift States:
·         California
·         Texas
·         Washington

States Where an Engagement Ring Can Always Be Kept:
Other courts have held the belief that an engagement ring is an unconditional gift and so it doesn't need to be given back.
Unconditional Gift States:
·         Montana