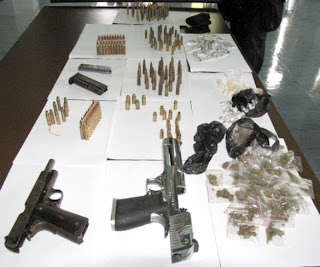 
That's the law, so why isn't it being upheld and enforced?
16 comments:

Q: If you file a petition for a divorce, is it necessary to have a hearing in court? or if both parties agree via lawyers can the matter stay out of court?

A: You will usually only need to attend a hearing dealing with the divorce if the proceedings are contested. You may have to attend court if you or your spouse are unable to agree arrangements for your children or for financial provision. If you both consent to all the terms, then there is no need to go to court.
4 comments:

Q: Why do we have an 11 year old Act of Parliament that cannot be used?

A: Over the past few years we've seen a spate of dog attacks in Trinidad and Tobago. One woman was killed, another woman almost had a breast bitten off, a three year old was saved at the last minute, a 13-year old was bitten and this man narrowly escaped with his life after being attacked.

These five incidents are a small percentage of the cases where our citizens have been attacked, they all concern pitbulls and the owners have not been held accountable.

What is even more surprising is that we have legislation to govern this lawlessness. After the UK's Dogs Act 1871, we implemented our own Dogs Act 1918 (as amended). Since then, following the UK's Dangerous Dogs Act 1991 we again brought in our Dangerous Dogs Act 2000, which was passed during the UNC's term in office and had the full support of the PNM. However, this Act has not been "implemented". Also, there is this funny term called "proclaim", that Jumbie has been asking me about for a while, but even I have no clue. Why does an Act need to be "proclaimed"?

Usually, Acts may be implemented immediately, on a specific starting date, or in stages. The practical implementation of an Act is the responsibility of the appropriate government department, not Parliament.

However, not to disappoint the Third-World country critics, we don't have a government department to deal with the implementation of this Act.

Anyway, since our DDA has not been implemented, let's stick to the one that is. Section 15 of the DA had a more sensible definition of what a dangerous dog is, which is any dog that the judge thinks is a hazard to society. Unfortunately, we took a backward step in our DDA declaring that only 3 types of dogs could be considered "dangerous". I have seen very dangerous "pot hounds" before, which is not one of the three. Do breeds determine danger? Doesn't it depend on how the owner trains the dog?
This is the first reason why many owners who have dogs that attack people would not be able to be punished under the DDA. Section 12 and 13 of the DA also made it clear that these crimes should be punished by a fine and that the dogs should be "destroyed".
We have one stagnant Act (DDA) and one that is active (DA), but still not using it.

Why do we let these dogs continue to wreak havoc on our citizens while the government sits idly by playing politics? I think the DA should be amended and the DDA repealed because the restrictions on dangerous dog breeds are asinine.

Someone needs to do something. How many more must die or get injured before the government acts? These Acts should be a deterrent to this kind of behaviour by uncaring citizens who let 7 dangerous pitbulls attack a woman. Are we living in a civilised society with laws, or have we been transported back to pre-historic times?
No comments: