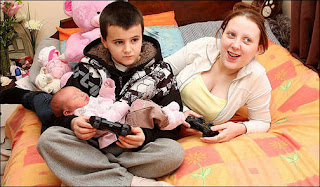 A: It is a well known fact that children are getting involved in sexual activity at the youngest ages we've ever seen, and sometimes subsequently having children, like this 13 year old father in England.

In Trinidad & Tobago, it is no different. A lot of girls use their school-time looking for older men, something which gives them "rank" amongst their peers.

Taking that into consideration, this advice is ESPECIALLY for men.

Statutory rape is a VERY serious offence, which is defined as sexual intercourse by an adult with a person below a statutorily designated age.

The criminal offense of statutory rape is committed when an adult sexually penetrates a person who, under the law, is incapable of consenting to sex. Minors and physically and mentally incapacitated persons are deemed incapable of consenting to sex.. These persons are considered deserving of special protection because they are especially vulnerable due to their youth or condition.

Statutory rape is different from other types of rape in that force and lack of consent are not necessary for conviction. A defendant will be convicted of statutory rape even if the complainant explicitly consented to the sexual contact and no force was used by the actor. By contrast, other rape generally occurs when a person overcomes another person by force and without the person's consent.

The actor's age is an important factor in statutory rape where the offense is based on the victim's age. Furthermore, a defendant may not argue that he was mistaken as to the minor's age or incapacity.