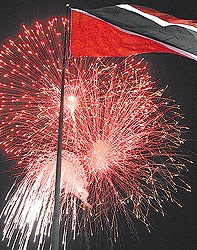 
If someone wants to set off fireworks in one of the “banned” areas, permission must be obtained at least forty-eight (48) hours prior, from the Commissioner of Police or a Superintendent with the authority, which  will be in writing, prescribing the time and place.