Q: What does the law of Trinidad and Tobago say about hangings? 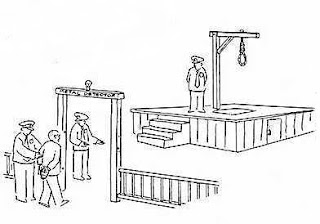 A: We all know that after the most famous hangings in Trinidad and Tobago, which involved Nankissoon Boodram (Dole Chadee) and his 8 henchmen, the hanging of Anthony Briggs was the last the country has seen.
Why? The main reason is a plethora of Human Rights Laws.


Chronology of Death Penalty laws in Trinidad and Tobago.
1. The Bill of Rights 1688 expressly prohibits any "cruel and unusual punishment".

2. According to Section 4 of the Offences Against the Person Act (Chapter 11:08) "Every person convicted of murder shall suffer death" and the Criminal Procedure Act (Chapter 12:02) in section 57 provides:−
"(1) Every warrant for the execution of any prisoner under sentence of death shall be under the hand and Seal of the President, and shall be directed to the Marshal, and shall be carried into execution by such Marshal or his assistant at such time and place as mentioned in the warrant; and the warrant shall be in the form set out as Form A in the Second Schedule ..."

Form A expressly recites that the person involved has been sentenced to be: "hanged by the neck until he be dead". The President of the Republic in signing the warrant authorises the execution in that manner.

3. Section 5(2) of The Constitution of Trinidad and Tobago states that:
"Parliament may not- (b) impose or authorise the imposition of cruel and unusual treatment or punishment...

However, Section 6(1) of the Constitution states:
"Nothing in sections 4 and 5 shall invalidate – (a) an existing law …".
An existing law is a law that was implemented before the Constitution. While the Bill of Rights 1688 pre-dates the laws in #2, it must be read with subsequent legislation and common law.


International Appeals/Privy Council
In the 4-1 Privy Council appeal rejection for Ronald John v State of Trinidad and Tobago (2009), Baroness Hale, in her dissenting opinion said: “It is accepted that the death penalty is imposed and executed for the crime of murder consistent with the Constitution of Trinidad and Tobago, and where the debate concerns the mandatory imposition of the death penalty in all cases of murder irrespective of the circumstances. It is accepted that our task as the supreme court for Trinidad and Tobago, is to uphold its law whether we like it or not.”

However, this is still not the case because the Privy Council members' personal beliefs still interfere with their decision making.

The ruling in Thomas v Baptiste [2000] 1 AC 1 confirmed that there could not be execution of prisoners with pending petitions before international bodies. However, this was immediately repealed by the Constitution (Amendment) (No. 3) Bill 2000.
This means that even if a convicted criminal has applied to the Privy Council, they could be hanged during the waiting period, but it is yet to be followed.

Essentially, the Privy Council should not have as much power as they do when it comes to capital punishment in Trinidad and Tobago, especially with the Caribbean Court of Justice (CCJ) in place, but with politics being more important than what's best for the country, we have yet to see the Constitutional Reform to permanently remove the Privy Council. Some CCJ judges even think it's insulting to continue using the Privy Council, disregarding the role of the CCJ.

When the Government (PNM) attempted to enact a new Constitution, the Opposition (UNC) refused to agree to the changes until it changed the system of voting (proportional representation). The new Government (UNC/PP) is trying to do the same thing, and I hope the Opposition (PNM) would forget politics and do the right thing for the country.

Trinidad and Tobago's response to the Death Penalty
According to research, almost 90% of Trinbagonians want the death penalty (See: David A. C. Simmons, Conflicts of Law and Policy in the Caribbean-Human Rights and Enforcement of the Death. Penalty-Between a Rock and a Hard Place, 2000 Journal of Transnational Law and Policy, 263, p. 266)


My opinion
Hang them in Woodford Square!

I like this quote because she expresses my views exactly. The Death Penalty, in any form, is necessary, but only in cases where the truth is undeniable and the crime is diabolical, such as the murderers who did this. Also see this.

The Trinidad and Tobago Humanist Association (TTHA), along with many other organisations around the world have done research to conclude that there is no country in the world where the death penalty has been proven to reduce crime. Although this is true, why should statistics in other countries influence our decision?